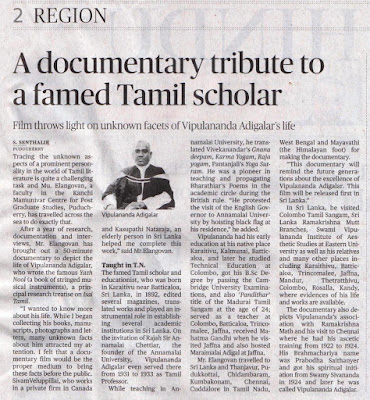 A documentary tribute to a famed Tamil scholar

Tracing the unknown aspects of a prominent personality in the world of Tamil literature is quite a challenging task and Mu. Elangovan, a faculty in the Kanchi Mamunivar Centre for Post Graduate Studies, Puducherry, has travelled across the sea to do exactly that.

After a year of research, documentation and interviews, Mr. Elangovan has brought out a 50-minute documentary to depict the life of Vipulananda Adigalar, who wrote the famous Yazh Nool (a book of stringed musical instruments), a principal research treatise on Isai Tamil .

“I wanted to know more about his life. While I began collecting his books, manuscripts, photographs and letters, many unknown facts about him attracted my attention. I felt that a documentary film would be the proper medium to bring these facts before the public. SivamVeluppillai, who works in a private firm in Canada and Kasupathi Nataraja, an elderly person in Sri Lanka helped me complete this work,” said Mr.Elangovan.

The famed Tamil scholar and educationist, who was born in Karaitivu near Batticaloa, Sri Lanka, in 1892, edited several magazines, translated works and played an instrumental role in establishing several academic institutions in Sri Lanka. On the invitation of Rajah Sir Annamalai Chettiar, the founder of the Annamalai University, Vipulananda Adigalar even served there from 1931 to 1933 as Tamil Professor.

While teaching in Annamalai University, he translated Vivekanandar’s Gnana deepam , Karma Yogam , Raja yogam , Pantanjali’s Yoga Sutram . He was a pioneer in teaching and propagating Bharathiar’s Poems in the academic circle during the British rule. “He protested the visit of the English Governor to Annamalai University by hoisting black flag at his residence,” he added.

Vipulananda had his early education at his native place Karaitivu, Kalmunai, Batticaloa, and later he studied Technical Education at Colombo, got his B.Sc Degree by passing the Cambridge University Examinations, and also ‘ Pandithar ’ title of the Madurai Tamil Sangam at the age of 24; served as a teacher at Colombo, Batticaloa, Trincomalee, Jaffna, received Mahatma Gandhi when he visited Jaffna and also hosted Maraimalai Adigal at Jaffna.

“This documentary will remind the future generations about the excellence of Vipulananda Adigalar. This film will be released first in Sri Lanka.”

In Sri Lanka, he visited Colombo Tamil Sangam, Sri Lanka Ramakrishna Mutt Branches, Swami Vipulananda Institute of Aesthetic Studies at Eastern University as well as his relatives and many other places including Karaithivu, Batticaloa, Trincomalee, Jaffna, Mandur, Thetratthivu, Colombo, Rosalla, Kandy, where evidences of his life and works are available.

The documentary also depicts Vipulananda’s association with Ramakrishna Math and his visit to Chennai where he had his ascetic training from 1922 to 1924. His Brahmachariya name was Prabodha Saithanyer and got his spiritual initiation from Swamy Sivananda in 1924 and later he was called Vipulananda Adigalar. 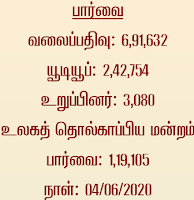